The implementation of DAC 6 in the national law of the Member States of the European Union and a more stringent presentation of the regulatory content is in the discretion of the Member State itself and must therefore be examined in each country on a case-by-case basis. Simplified reporting requirements applicable to individuals due to the professional obligation to maintain secrecy is often interpreted differently in each Member State of the European Union.

On 8 August 2019, the Luxembourg government submitted to the Luxembourg Parliament bill no. 7465 on the adoption and implementation of a reporting obligation for cross-border tax arrangements. Bill no. 7465 has not yet been passed but is expected to enter into force retroactively as of 1 January 2020.

The Luxembourg bill and the implemented German legislation essentially correspond to DAC 6. Both are broadly defined and contain a great deal of ambiguities in their practical application.

The Luxembourg bill imposes a reporting obligation on the “intermediary” and the taxpayer; in this context, an “intermediary” means any person subject to European law that designs, markets, organizes, makes available for use, or manages the implementation of cross-border arrangements for third parties. This includes providers of tax advice, lawyers, and AIFMs. Due to the broad interpretation of the term “intermediary”, questions arise as to the practical application, which should be specified in more detail in a future national administrative instruction. Therefore, a sound knowledge of tax law is often necessary in order to identify and assess cross-border arrangements as such. Also, due to the broad definition, it can be assumed that several participants with respect to the same cross-border arrangement may be “intermediaries” even though, in general, double reporting is not provided for. However, if an “intermediary” is not subject to the law of a European state or cannot report due to an obligation to maintain secrecy imposed in the country of residence, the reporting obligation will ultimately shift to the taxpayer. In theory, this reporting obligation may also ultimately affect the investor in an investment fund.

In particular, cross-border arrangements fulfilling one of the generic or specific hallmarks and whose objective is to obtain a tax advantage (“main benefit” test) are subject to reporting requirements.

The reporting obligation itself applies all direct taxes, such as income tax, corporate tax, trade tax, real estate transfer tax, inheritance tax, and gift tax. VAT as an indirect tax seems to be exempt from the reporting obligation. The applicability of the taxe d’abonnement imposed on Luxembourg investment funds remains unclear.

In order to verify and identify reportable hallmarks, the bill also refers to the explanations in Annex IV of the amending Directive 2018/822/EU. Generic hallmarks describe in particular the external hallmarks of the arrangement, such as the establishment of a condition of confidentiality with regard to the tax advantage of a structure. Specific hallmarks include transaction-related advantages, such as transfer pricing models. Thus, the reporting obligations also cover legal cross-border arrangements. The below chart gives an overview of the generic and specific hallmarks which are currently to be implemented in Luxembourg law. 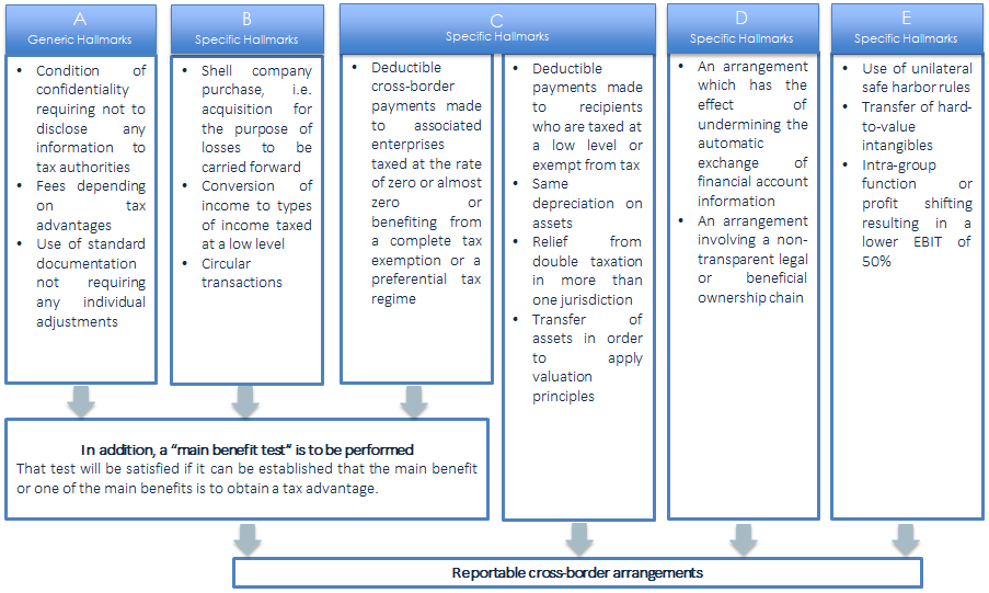 If a reportable structure has been identified, the current bill, similar to the amending directive, provides for a reporting obligation within 30 days of the end of the quarter to the competent tax authority. This deadline starts, among other things, (i) when an arrangement is made available for implementation, (ii) when an arrangement is ready for implementation, or (iii) when implementation has begun, whichever occurs first. Furthermore, “old arrangements” implemented between 25 June 2018 and 1 July 2020 (“transition period”) must be reported within 30 days of the end of the transition period by 31 August 2020. Below is a timeline of key data which can be simplified as follows:

Reporting to be submitted to the relevant tax authority itself includes, in a simplified form, among other things, additional information on the “intermediary” and the taxpayer, details and assessment of the hallmarks used, a brief description of the arrangement, date of the beginning of implementation, a value of the reportable cross-border arrangement, and a list of Member States involved. After the transition period on 1 July 2020, the cross-border arrangements reported will be exchanged between the relevant tax authorities 30 days of the end of the reporting quarter.

Up to now, no information has been provided as to the reporting format and method in Luxembourg. Germany has published an xml standard which transmits reportable information to the German tax authority via an interface in Elster, thus enabling the exchange of information.

Conclusions and Actions to Be Taken

Luxembourg bill no. 7465 essentially corresponds to DAC 6 and is not sufficiently specific due to the missing or broad provisions laid down in DAC 6. As a result, at least in the initial phase, a broad interpretation of the hallmarks and thus of the reportable cross-border arrangements can be expected. In this regard, the financial center Luxembourg expects to obtain further clarifications from the tax authority(ies). Until then, national and international “unnecessary reports” and double reporting can be expected. Starting today, work should begin on identifying old arrangements and in particular arrangements to be reported in order to fulfill the reporting obligations due in August 2020 in a timely manner. In the event that the “intermediary” or the taxpayer fails or delays to transmit information, or transmits incomplete or incorrect data, he/she can be subject to sanctions of up to EUR 250,000 in Luxembourg.

If taxpayers have not yet made a decision with regard to the identification of reportable cross-border arrangements implemented during the transition period, such decision should be taken immediately and no later than by 1 July 2020. The reporting data should be prepared in a timely manner so that it can be promptly made available to the competent tax authorities.

In phase I, AIQU TAX S.à r.l. provides assistance in an impact analysis of the implemented structure and transactions in order to prepare the reporting in phase II and submit it to the competent tax authority. We look forward to presenting our services in a personal meeting.